by The Candy Snatchers 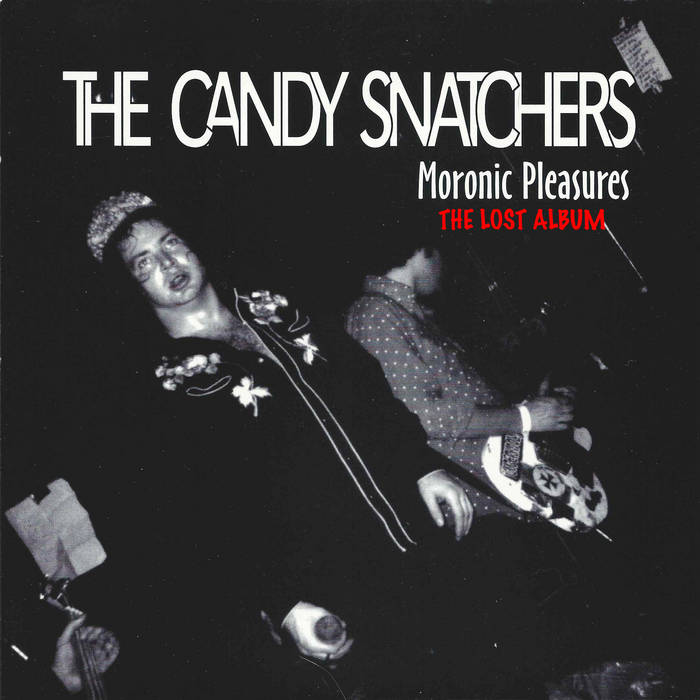 “Moronic Pleasures: The Saga of the Lost Candy Snatchers Album”

“One Man’s Junk Is Another Man’s Treasure”

Sometime in late 1997, Dave Champion (my heterosexual life partner) and I drove down from Washington, DC, to Norfolk, Virginia, to see our favorite band, the Candy Snatchers, play at some sketchy dive. We had done this several times already, so we knew it was a guaranteed good time. We were also lucky to be friends with the band and stayed at guitarist Matthew Odietus’ apartment most of those times. This time at his place before we left for the club, Matt played us a cassette of the new Snatchers album: “Moronic Pleasures.” Dave and I were so blown away that we insisted on dubs of the cassette on the spot. Little did we know what would happen (or not happen as it were) next.

Let’s back up a bit. After a handful of killer punk rock-n-roll 7” singles, the Candy Snatchers had signed a deal with Safehouse Records in NYC and recorded/released their self-titled debut album in 1996. It was, quite frankly, some of the best rock-n-roll ever committed to tape. Here was a band that was part “Raw Power”-era Stooges, part New York Dolls, part Ramones, part Misfits, and part every other sleazy, tasty morsel. The band featured the Über-Toxic Twins in guitarist Matthew Odietus and singer Larry May. Both were blessed with shocking acumen on their instruments: Matt channeled Johnny Thunders and James Williamson in his playing and Larry was a psychotic gene splice of Glenn Danzig, Gerry Roslie, and Roky Erickson with his voice... plus add a touch of the Tasmanian Devil and you’ve got Larry to a tee! All the while, Uncle Willy Johns kept things solid and simple on the bass.

Now it was early 1997. With explosive new drummer, Sergio Ponce, they had written an impressive amount of new songs and were ready to start tracking them to tape. The first attempt to capture the magic took them to Compactor Studio in Brooklyn, NYC, with Paul Johnson engineering. Nineteen (19) songs were laid down with 17 planned for the new album titled “Moronic Pleasures” and two (“Bum” and “You Want What”) slated for a 7” single on Solamente Records. The 17 album tracks were given only a rough mix and dubbed onto cassette for the band to review; the two 7” single tracks were given a proper, final mix and sent to the record label for pressing. For some inexplicable reason (to me) that has gone to the grave, Matt rejected this session. When I spoke with Larry, Willy, and Serge at the time, they all thought the songs, performances, and production were solid.

Paul Johnson generously contributed his remembrances: “Matt called me about doing a Candy Snatchers record, and although I had never heard or seen the band, I had heard good things about them. I also remember someone warning me that they could be trouble, but I didn’t care about that. I had known Serge for years and had grown up hanging out with the M-80’s, so I was unshockable at that point.

“They were playing at the Continental Club at St Marks Place, so I thought I would go check them out. The place was packed and they sounded great, but I could not see them, so I lifted my head to take a peek and instantaneously got whacked in the face by a flying combat boot Larry had hurled from the stage. ‘I hope this is not a sign of things to come,’ I thought. As it turns out, it wasn’t; although the first part of the first day of recording was spent with Matt, Rob Katherman from the M-80’s, and myself trying to get Serge and Willy to explain to us over the phone where they were in Brooklyn so someone could come and get them. Apparently, neither of them could remember how they got there the night before nor could the people they were with explain to us how to get there. To make it worse, they were in different places.

“Eventually they were rescued and got set up and going pretty quick. I was amazed at how fast they worked. They had me roll the tape while they played the songs from a setlist: one song after another until we were about to run out of tape. I might have stopped the tape only a couple of times during the whole session for mistakes’ sake. No one did that in those days… maybe some hardcore punk bands back in the 80’s.

“I was also unaware that I was ‘producing’ the record until halfway through the session. I thought I was just the recording engineer. Usually a producer gets to hear rough demos or live tapes of the songs to be recorded so they can come up with production ideas. I had been doing mostly 60’s garage sounding bands, so I suggested background vocals, handclaps, and some tambourine. ‘We like that kind of stuff, but it’s not right for us,’ they politely explained. Looking back, I have to agree with them on that one.

“Willy’s bass had been set on fire or something like that, so he used a Gibson SG bass with old strings that I had in the studio. Not sure if that was the right sound for him, but it is what we had. When we took a break, Rob told me Matt was unhappy with the guitar sound. He had heard the ‘Floyds of Flatbush’ record I had done and told me he liked that guitar sound. I tried explaining that that was done on a four-track and is a very different type of recording than the way we were doing things with a 16-track. I also had very low-budget studio… a couple of cheap compressors and a spring reverb unit. That was it. Most of the bands that came to Compactor Studio requested a lo-fi sound or wanted to sound like Guitar Wolf. That was about what I was capable of.

“After we did the basic tracks, Matt went back and played a second rhythm guitar and solos pretty much the same way: from song to song without stopping the tape. Vocals, same thing. Larry belted out one song after another. Then we mixed and off they went. I had heard they were not going to use the recordings because Matt did not like the guitar sound. I felt horrible that they had spent the money and time and had nothing to show for it. I tried to explain to Matt that my cassette deck was a piece of crap and that it would sound better once it was mastered. ‘It must be the worst thing ever. Why would anyone even make a piece of shit like that?’ he replied over the phone. It was his only point of reference. Oddly enough, they returned to my studio a number of times.

“I’m glad it’s finally going to be mixed and mastered properly. I’m looking forward to hearing it. I wish Matt were still around so he could as well.”

The second attempt to record was a quick stop at Andy Slob’s basement studio in Cincinnati, Ohio, while they were on tour. The band was supposedly unhappy with the overall sound and rejected these sessions as their new album. Most songs, though, eventually were released on various singles and compilations. Larry recalled, “The Cinci session was a blazing performance, but something in the recording made it sound like a drill in the ear!”

With both attempted sessions rejected, the band eventually headed back to NYC with Dean Rispler at the engineering helm to re-record most of the songs for the THIRD time. This final session became their second album now titled “Human Zoo,” presumably after a Bon Scott lyric. The album was released on Go-Kart Records in 1998 and the previous “Moronic Pleasures” session at Compactor Studio was forgotten for 20 years.

Larry May: “The title ‘Human Zoo’ I named after William Weber’s old band. I used to go to see them in Cincinnati when I was 16. He had recently joined the band on 2nd guitar for touring. We were just being silly, but yes, it’s in ‘If You Want Blood, You Got It’ as well. Hahahaha! William thought it was hilarious that we were actually gonna call it that.”

Now don’t get me wrong, “Human Zoo” rocks like a motherfucker, but “Moronic Pleasures” as recorded at Compactor Studio is the Candy Snatchers at their zenith. In my humble opinion, the performances are stronger and the feel of the songs is sleazier; and I must disagree with Matt on his guitar sound!

I took on the crusade of rescuing this session from oblivion. First, I spoke with Dan-O Deckelman (good friend, ex-Adam West guitarist bandmate, and studio entrepreneur) who got the master reels from Paul Johnson and managed the digital transfer. Second, I got the multi-tracks to Dennis Kane (good friend, Delicious Fullness producer, and studio wizard) who freshly and properly mixed and mastered all 19 songs. There were some missing tracks on “Ass Casserole,” so my cassette version of the song was used for continuity. I now offer this 20-years-in-the-making project to you, the astute listener, in the order the band intended... including some songs that didn’t get re-recorded and make it onto “Human Zoo.” And as Larry sings on the album opener: “I’ve got no time to waste! I’m just a drunk-ass motherfucker who ran outta space!” After 20 years, there’s no more time to waste...

All songs by Odietus/May except
“Pissed Off, Ripped Off, Screwed,” “Hooligan,” “Hard Up,” and “Gone for Good” by May
“Fresh Rag” by Pop/Williamson
“Such a Fool” by Bent/Clic
(c) 1997 Candy Snatchers and Copyright Control
(p) 2017 Fandango Records