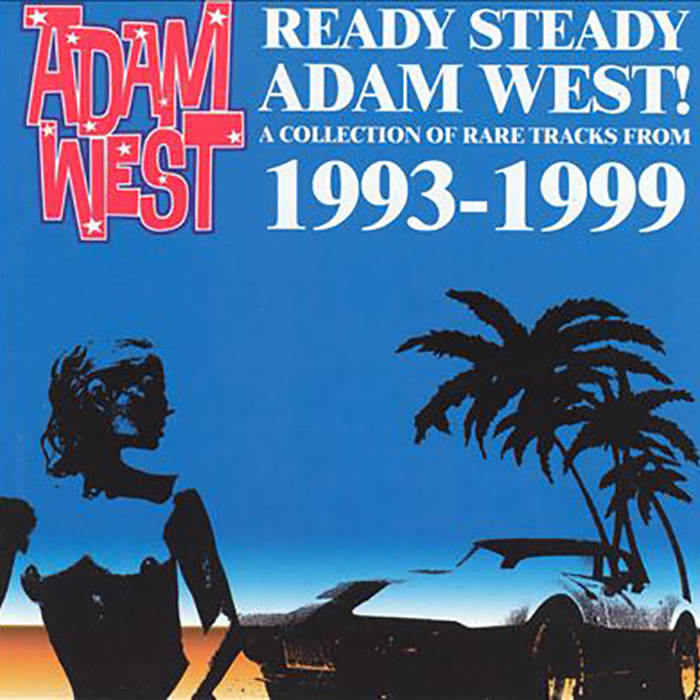 First compilation of rare songs from 1993-1999 released on CD and limited LP.

If It's Always Groovy, You Know You Gotta Do It!

Local Lizard King Jake Starr and stalwart mod Bill Crandall had been friends since high school and had played in bands since 1981. Both were mods as teenagers and had a love for the vibrant sounds of 60s British Invasion, garage, and late 70s mod archetypes like the Jam. It seemed inevitable that they would someday unite.

The year was 1991 when Jake and Bill finally pooled their talent and started writing the first Adam West songs. There was no band yet, just the two of them, but they knew they were onto something good. One night while out carousing, Bill and Jake ran into a friend of Bill's, Ray Wiley, who was jamming with a bass player and a drummer. It seemed like perfect timing and in late December 1991, the five congregated at drummer Tom Barrick's house for the first rehearsal.

Skip ahead 3 months for the1st Adam West show on 18 March 1992. Keep moving to the 1st demo session in which 3 songs were recorded and pressed in a limited edition cassette of 100 copies. Further on to September 1992 when ex-King Face bass player Andy Rapoport joined the band. Moving still to the 2nd recording session in January 1993 where "I Get A Sensation" and "Little Sister" were laid down and eventually commited to wax in June 1993 as Adam West's debut single. Limited to 500 copies (all hand-numbered with the first 100 copies on green wax), this single launched Jake Starr's record label, Fandango Records.

By the time the debut single was released, more songs had been written. The 3rd recording session in August 1993 produced a one-take joke of a Misfits song "Cough/Cool" that became Adam West's 2nd single and their first fan club record. Longtime friend of the band Ray Brennan had told Jake that if the band recorded a cover of "Cough/Cool," he would pay for its release. Sure enough, 108 copies of a one-sided single on green wax were released in September 1993.

Fast forward to February 1994 when Ray Wiley left the band and the four-piece line-up carried on until a fateful gig at CBGBs in New York City in November 1994. Bill and Andy decided to leave the band at that point. That past June, a 4-song 7" EP was released in Australia called the "Dance Session EP." This record included the two songs from the debut single plus two outtakes: an original called "Oscar The Grouch" and a cover of the Ides of March 1970 hit "Vehicle." 500 copies with 100 on purple wax were pressed on Messiah Complex Records. The 4th recording session from June 1994 yielded another original song "Love Like A Stone" that eventually wound up on a local D.C. compilation called Capitol Crisis.

Now it was December 1994. Jake and Tom decided to carry on but things needed to rock harder. After an ad was placed in a local music magazine, guitarist Johnny Epiphone and bassist Steve were recruited. Epiphone was a rabid fan of Radio Birdman, Iggy and the Stooges, and the MC5. Steve was well-versed in 70s rock like AC/DC, Led Zeppelin, and Black Sabbath. A new Adam West was born and started recording almost immediately. Unfortunately, after a year and a whole album's worth of material recorded, only one song survived to see the light of day: "Beauty." This song was released in April 1996 on a split 7" with local band Bubblegum Christ. Limited to 500 copies with some on red wax and some on white wax, this is the single that started the theme of beautiful chicks on the record sleeves… a theme that continues to this day.

This line-up, although short-lived, formed the bond of Steve, Tom and Jake that thrived for the remainder of the 1990s. The three of them worked extremely well together and wrote music almost effortlessly.

Anyway, exit Johnny Epiphone and enter James Marlowe at the beginning of 1996. Marlowe was a virtuoso guitar player who picked up on Steve and Jake's songs immediately. First, covers of the Misfits "Halloween" and "She" and the Stooges "Search & Destroy" were recorded for fan club single #2. Released in July 1996, this single was limited to 200 on orange wax with an orange pumpkin sleeve and 100 numbered promos with a b&w sleeve. Right after that, recording sessions began for the debut album Mondo Royale.

Recorded mostly in a basement of an abandoned warehouse, the 14 songs on Mondo Royale showed great rock-n-roll diversity. The 5 songs chosen for this compilation vary from punk rock to stoner rock. The gigs with this line-up also showed greater energy and enthusiasm. Adam West were starting to make an international name for themselves when Mondo Royale was released in April 1997.

Skip ahead to November 1997. Adam West had a full-length album worth of new material to be recorded. James Marlowe decided to quit the band right before the recording sessions were to begin. Distraught but not broken, Steve, Jake and Tom decided to carry on to find a new guitar player. Another ad was put in a local music rag and Derrick Baranowsky was recruited after a particularly impressive audition. Derrick learned the songs, a few new ones sprouted up, and the recording sessions began in June 1998 for what would eventually be named 13 de luxe.

13 de luxe went way beyond its predecessor in ways of songwriting and balls-out rocking. Steve and James had written some amazing music and Jake's vocals and Tom's drumming both went beyond all expectations. When 13 de luxe was finally released in March 1999, Adam West were on their way to the top. The 5 songs showcased from 13 de luxe on this compilation say it all. "Vanilla" is still played at every gig to this day.

The future held touring Europe, many more records, another line-up shift, and getting signed to a bigger record label. But that's another story. This story stops at the year 1999. Check out the Hi-Balls Are Rolling! CD compilation on Twenty Stone Blatt Records for the next chapter.

And remember: "If it's always groovy, you know you gotta do it!"

All tracks recorded over the years at Phase Recording by Bruce Falkinburg, Nomad Studios by Matt Fisher, Inner Ear Studios by Don Zientara, and WGNS Studios by Geoff Turner.

This compilation mastered at Phase Recording by Bruce Falkinburg on 28 December 2001.

All tracks courtesy the respective record labels. Adam West thanks you all!